Donna Farhi on How to Release the Psoas & Resolve Back Pain 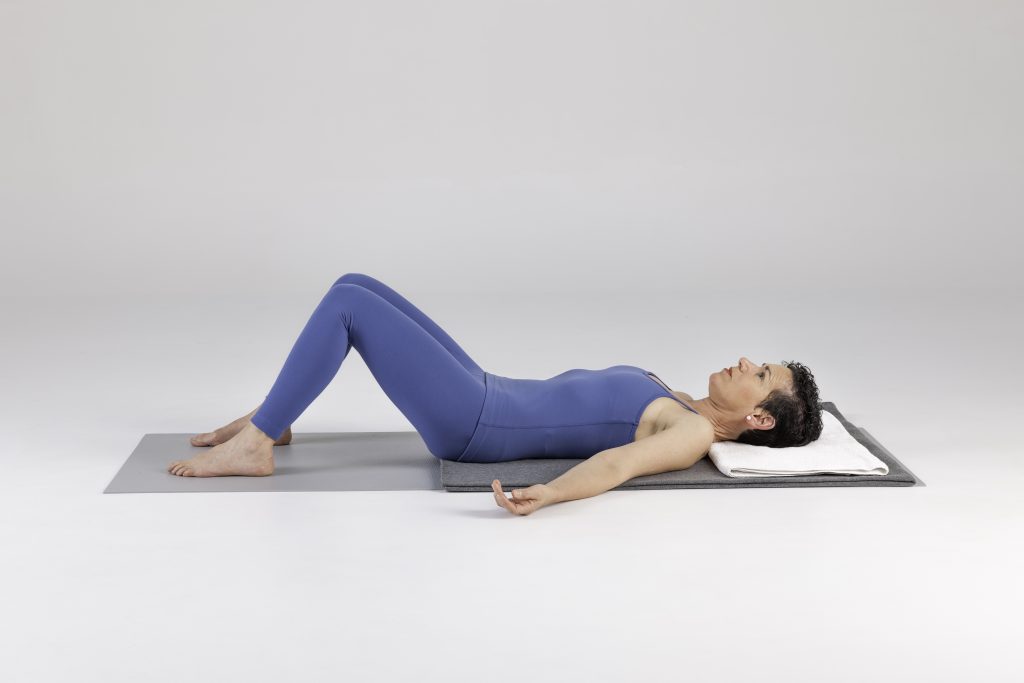 Constructive Rest Position, a powerful practice for anyone with spinal discomfort.

by Donna Farhi, co-author of Pathways to a Centered Body: Gentle Yoga Therapy for Core Stability, Healing Back Pain, and Moving with Ease.

A recent collation of several back pain studies in America revealed that 8 out of every 10 Americans will have back problems at some point during their lifetimes, yet only one in ten people find out the primary cause of their pain.

A further 54 percent of Americans who experience low back pain spend the majority of their workday sitting, a position that puts tremendous weight load pressures onto the intervertebral discs. Not so coincidentally, sitting for long hours in a chair also causes chronic tightness in the deep core muscles of the body.

Here in New Zealand, 59% of those complaining of chronic pain locate that pain in the lower back. So, it’s not surprising that many of the people who come to our Yoga classes arrive with preexisting issues in their backs.

What are some of the most yoga swing common warning signals that can help us to identify those that may be having issues with their lower backs? And what are some of the simplest things we can do in class that can make a real difference to relieving and addressing the root cause of back pain?

We’ve all been there. You ask your students to lie down with their legs extended on the floor, and then, without being guided to do so, throughout the room many people will bend their knees.

If it’s the end of class and you are preparing for relaxation these will be same people who invariably need a bolster placed under their knees. Why? Because when they straighten their legs, they feel one or a combination of many symptoms such as pain around the sacroiliac joints, discomfort in the lumbar spine, or nerve sensations that can travel into the legs and feet. Sometimes this discomfort is always on one side, and sometimes it’s on both sides of the back. Intuitively, people know that bending the knees often alleviates their woes.

To understand why bending the knees so often releases pressure in the back you have to know a little about the deepest core abdominal muscle.

We usually think of the abdomen as the front of the body, but the deepest abdominal muscles actually lie in the back of the abdominal wall right next to the lumbar spine. 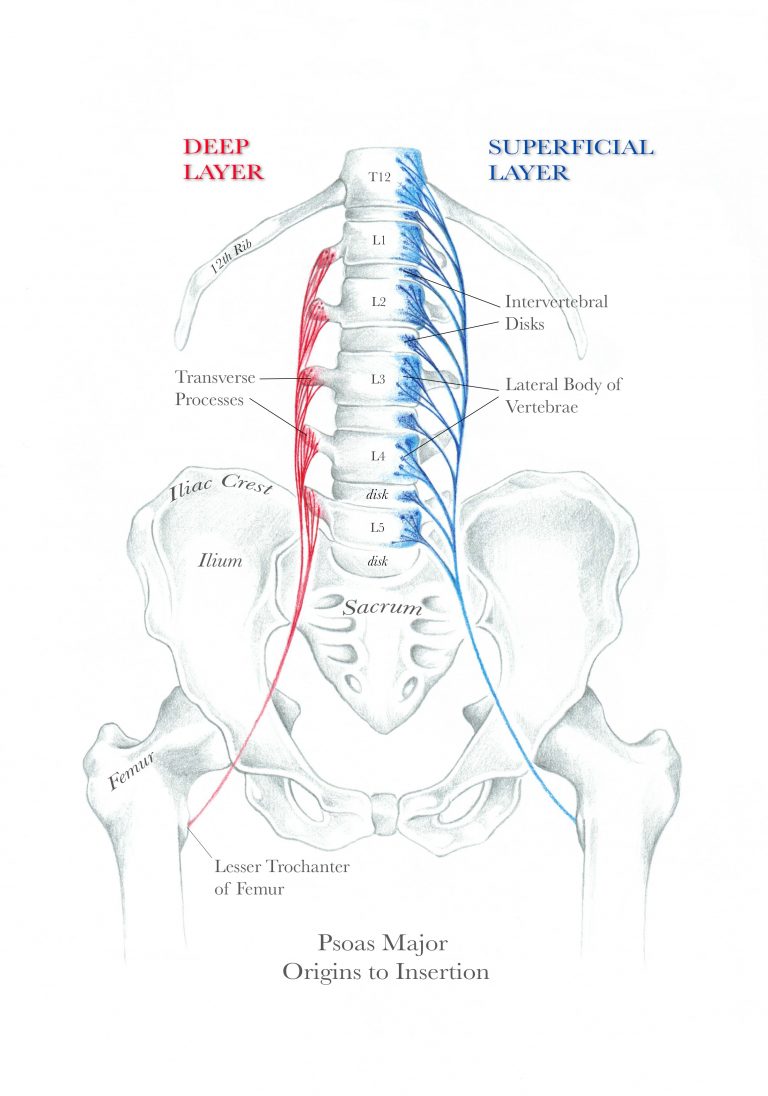 Called the psoas muscles, (pronounced so-az with a silent p), psoas major is approximately 41 centimeters long and is a thick triangular-shaped muscle that connects the spine to the legs. The psoas major is subdivided into two parts. The superficial portion arises from the sides of the 12th thoracic and 1st-5 lumbar vertebrae, as well as the 1st-4th intervertebral disks. The deep portion arises from the transverse processes of the 1st-5th lumbar vertebrae.

The psoas major journeys from its origin on the spine diagonally forward and laterally over the pubic bone and then dives backwards to attach to the inside of the femur by a shared tendinous insertion with the iliacus. 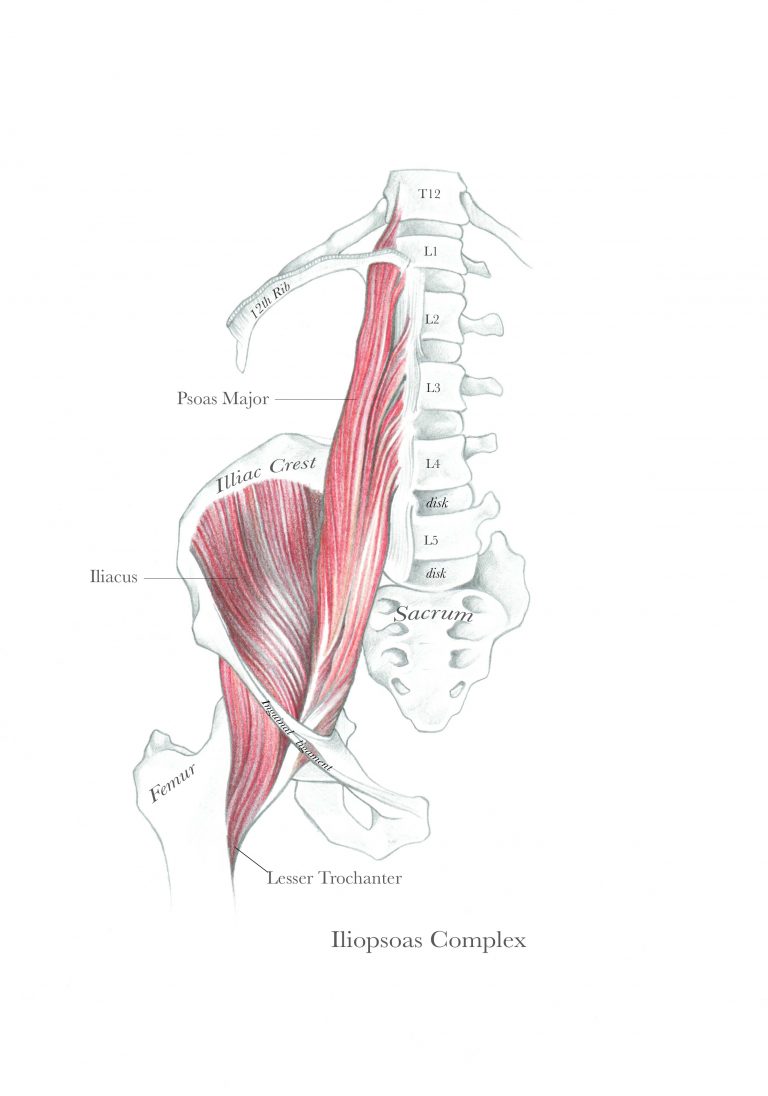 The psoas muscles used to be classified by anatomists as the primary mover for hip flexion (e.g. in walking), but more recent research reveals its primary function as a stabilizer of the lumbar spine. Think of your psoas muscles as two industrial-strength columns girding the sides of your lumbar spine, and you get a pretty good idea of how important these muscles are to spinal stability. Which is why, when things go wrong in these deep core muscles, a lot of other things go wrong.

In most quadrupeds, the psoas major does not touch the pelvis but connects directly from the spine to the femur. Our evolution to upright standing has put a very different stress on the psoas, requiring it to bend around the pelvis before detouring back to the femur. 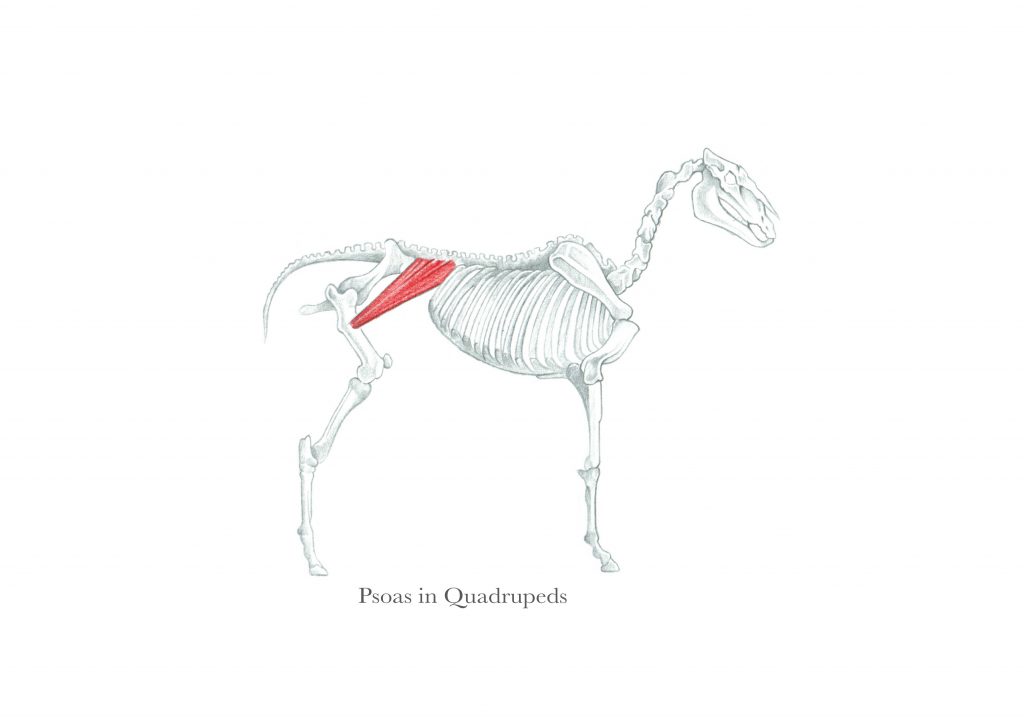 Thus the psoas is already under considerable tension just in the simple act of standing or lying down with the legs straight. When the psoas is chronically tight it most commonly tends to pull the lower back and pelvis into anterior rotation (hyperlordosis) and this is accentuated when the legs are straight. This is one of the reasons why so many people find it uncomfortable to lie on their back with the legs straight, and intuitively know to bend their knees to alleviate their discomfort. 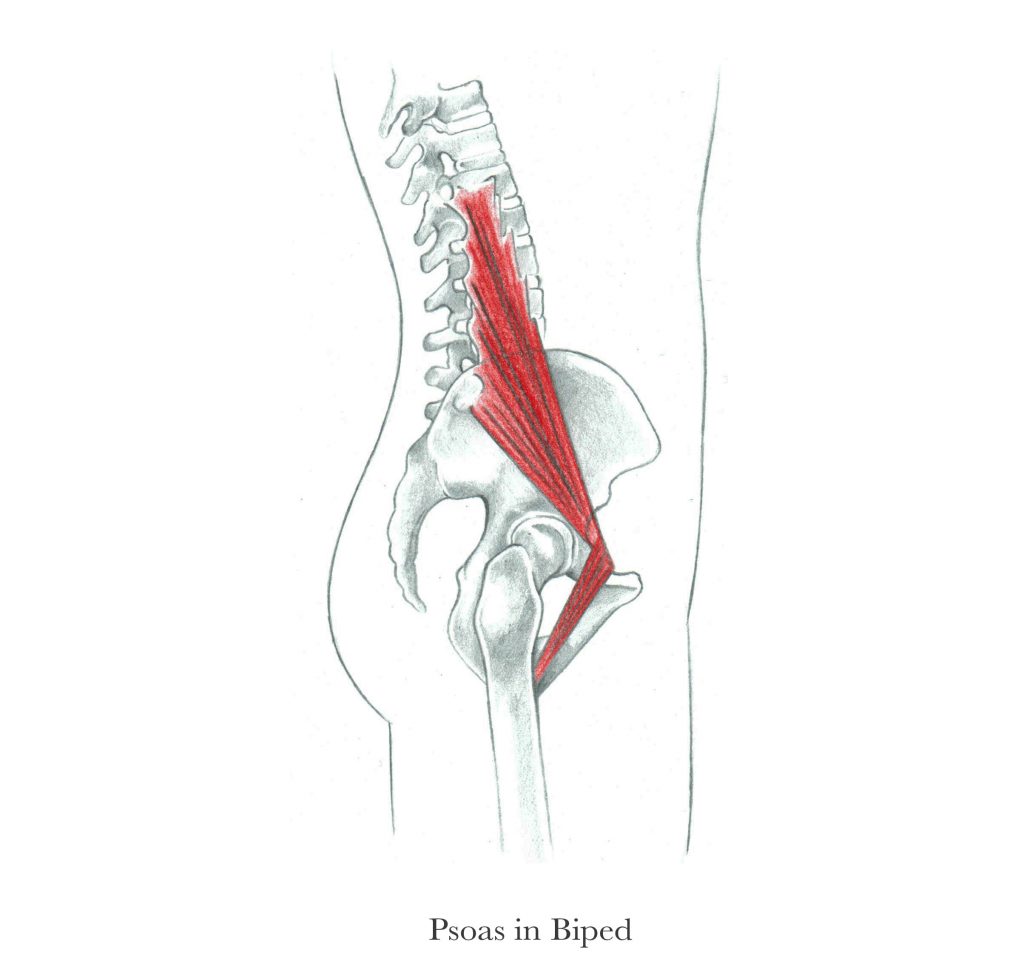 Tightness in the psoas can also result in posterior rotation of the yoga trapeze pelvis and flexion of the lower back (tucking the tail under and flattening the lumbar curvature), and this can also cause considerable discomfort in standing, lying down, and in movement. This paradoxical effect is explained by the working theory that tightness in the upper fibers of the psoas can contribute to spinal flexion, and tightness in the lower fibers can contribute to spinal extension.

When you or your students intuitively bend your knees to take pressure off of a tight psoas, you’re attempting to return to a quadruped position. Here’s where it gets interesting.

You can radically increase the benefits of lying with bent knees by learning how to be more precise with the practice. That precision is called Constructive Rest Position– the “go-to” for relaxing, releasing, and balancing the psoas.

Constructive Rest Position or CRP is one of the most powerful practices that I use for anyone with spinal discomfort.

The careful placement of the legs establishes the skeleton as the primary support so that the deep core muscles can relax and release. The hip bones “plug into” the hip socket, and with the assistance of gravity, allow the whole length of the psoas to release the spine.

How to practice Constructive Rest Position:

To lie in CRP, place your feet far enough away from your buttocks that the upper and lower leg bones “rest against each other like cards”. In this position, the rectus femoris (quadriceps) and the rectus abdominis (outer abdominal muscles) will be optimally relaxed. These two muscles are most likely to duplicate the action of the psoas and are often overdeveloped in those with issues in the deep core muscles.

If your feet are too close to the aerial yoga hammock buttocks, you will find that your upper thighs are unnecessarily tense and that the weight of your body primarily will be on the ball of your foot. If your feet are too far away from your buttocks, the abdominal muscles will be too engaged and the weight of the body primarily will be in the heel of the foot.